Pirouline: What’s In A Name

Piroulines have become a household name, spotted on the shelves at our local grocery markets and department stores. But do you know how founder Peter DeBeukelaer came up with that name?

“Well, a very very very long time ago, I was a kid, and I was reading a comic strip called Spirou,” said Peter. “The main character in this story was a cute animal with a very long tail that he used to do cool tricks.” At the time, it seemed to Peter that Spirou and his animal friend Marsupilami could do anything. 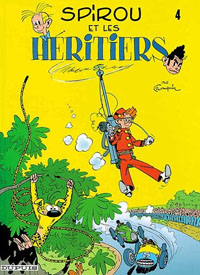 The popular French-Belgium comic followed the adventures of Spirou, his sidekick Fantasio and the long-tailed trickster Marsupilami. Since Spirou was a magazine reporter, the trio often set out in search of a story — but in most cases would find themselves at the center of an adventure fighting injustices and helping others.

Little did Peter know, years later, his favorite comic characters would resurface when he and his wife Mireille decided to move their family to America. The couple had a dream of building a bakery where they could reinvent his family’s famous cookies. And just like Spirou, they too set out on an adventure.

While Peter and Mireille had a recipe and a vision, they still didn’t have a name. “I wanted a name that didn’t necessarily mean anything but had a subliminal feeling about the identity of our cookie. I just let my imagination go,” said Peter. And that’s when his childhood memories came rushing back.

Peter knew he wanted to use the letter P from his own name — so he simply took away the S from the comic “Spirou.”  Then, he added the word “line”(derived from “storyline”) and put them together to create “Pirou-line.”

“It was unique and sounded fresh and delicate,” according to Peter. “ I liked it, and I still do. It’s elegant yet symbolic, and that was my goal.”