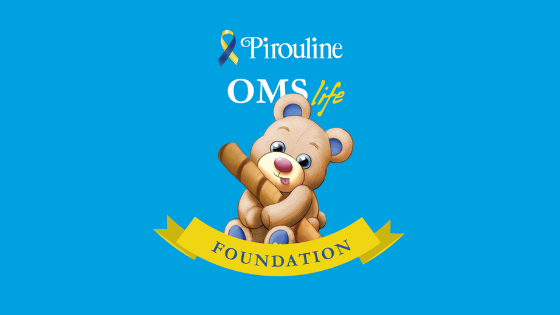 35 years ago, Peter and Mierelle DeBeukelaer moved from Belgium to Madison, MS with their eye on the American Dream, because that dream would open up new opportunities and possibilities to impact others – for good.

As Pirouline has grown, so has its desire to impact others – specifically in efforts to support the fight against Opsoclonus Myoclonus Syndrome (OMS). OMS is a rare, orphan disease primarily impacting children between the ages of 1-5 years old. The OMS Life Foundation calls OMS “an autoimmune disease suspected to occur when the immune system tries to battle cancer and gets confused, attacking the brain instead. Left untreated, OMS warriors will likely have deficiencies in speech, physical activities, learning, and other general life skills.”

Pirouline is in a special place because we know that we have fans all over the world, and we want to use our influence to educate our fans about much more than cookies, but how to impact the world for good, too.

For the past two years, Pirouline has hosted an annual fundraising event for OMS – the 80s Flashback Benefit. While we do enjoy the music and fun outfits from the 80s, the absolute priority for us is raising awareness and getting others to donate to the OMS Life Foundation. Pirouline shares the mission to raise awareness of OMS, maintain a support network for caregivers, and fund research for a cure.

Pirouline is looking for even bigger ways to bring awareness and raise support for the OMS Life Foundation, and we want to continue to point our fans to join in on this fight. Over the next few months, we will be sharing stories of OMS warriors – brave children who have battled this terrible disease.

Today, we celebrate Audrey who battled OMS and didn’t let it win – in fact, she used the disease as a platform to help others going through OMS as well.

Audrey’s battle with OMS began in February of 2010, at the age of 7. She had just fought back-to-back bouts of strep throat.   One morning she woke up, and her pa 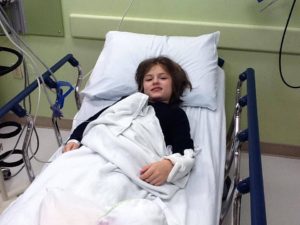 rents noticed her hand was shaking slightly. The next day she started waking up in the middle of the night in a screaming rage. She had a very hard time keeping her balance, even while sitting on a chair. The rage fits became a daily event, and her ability to focus was lost.

Audrey was brought to her pediatrician for evaluation. They could not pinpoint her condition, so they labeled it as “cerebral ataxia,” which is the catch-all diagnosis when they are not sure what the diagnosis is. Her parents would not accept this, so they asked for a second opinion at Dartmouth-Hitchcock Medical Center in Lebanon, NH. That was where she was diagnosed with “Sydenham’s Chorea.”

For almost a year she received IVIG treatments every few weeks as well as a daily steroid medication. Her condition did not improve. Her parents were getting frustrated as Audrey’s condition was not improving, and their household was in complete disarray. They did not know how to handle the rage attacks and her loss of stability. She developed severe anxiety and OCD.

Audrey’s parents continued to look for a solution. They did some research and found Dr. Mark Gorman at Boston Children’s Hospital. He was one of the few specialists in the U.S., in the treatment of OMS. When they met with Dr. Gorman, he knew immediately that Audrey suffered fr

om OMS. Although there was relief that there was finally a correct diagnosis, it ended up being bittersweet. The downside was that the treatment was rather severe.

She began a treatment of chemotherapy for almost 18 months, as well as regular IVIG treatments, speech and physical therapy, and numerous medications to help her function with her anxiety and OCD.

Now, 8 years later, she is in a better place. She completed her chemotherapy but continues to receive IVIG treatments every 8 weeks. She is back to being in a mainstream classroom. Her anxiety and OCD are manageable. Under Dr. Gorman’s care, her treatment has been well managed, and she is on a good path. She is now a sophomore in high school and is very active in social programs involving others with special needs, such as Best Buddies, NH Special Olympics, unified sports, and dance. She still struggles at times with the effects of her OMS, but she manages it quite nicely. 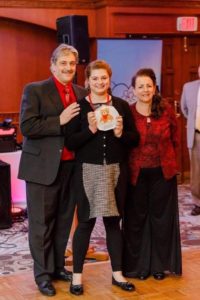 Audrey got involved with OMS Life shortly after being diagnosed. She started the local teddy bear drive through OMS Life and a local charity called Annie’s Angels Memorial Fund. She started with 38 teddy bears and is now up to over 1500 teddy bears a year that she gives to kids being treated at Boston Children’s Hospital. She has been recognized locally for her efforts in building the program to where it is today.

If you have questions about how you or your company can join as a sponsor, contact Lindsey at lferguson@pirouline.com.