(Pictured above: Emily and her Mother)

In the tiny town of Firth, Idaho, Emily Smith worked for hours creating a beautiful cake that would take home 2nd place in our 35th-anniversary swirl bake-off. The mom of three wanted to create something unique that would combine new decorating techniques with an old family recipe: Grandma Diane’s Chocolate Vinegar Cake.

It’s no surprise she chose to use her grandmother’s recipe as her love of baking started at a young age. “Sunday was our treat day. After church and dinner, we would usually make a sweet treat. Cookies were our favorite because we could sneak dough from the mixer,” according to Emily. As one of seven children, she remembers watching her mother bake and decorate wedding cakes. “I always thought it would be fun to decorate beautiful cakes.”

That’s why, when she heard about our Swirl Bake-off, she wanted to bake something that combined beauty and tradition.“ I told my husband I wanted to make a cake, and he was instantly supportive,” said Emily. “He got to work thinking about my creation.” The couple wanted to incorporate Piroulines in a way they hadn’t seen before. So after a little brainstorming, Emily decided to try a “fault line” cake using a family recipe.

Her creation took almost three hours and turned out slightly different than she originally envisioned. “ For me, baking any cake is like a journey. I start by thinking it will look one way, and often times it turns out completely different. This cake was definitely that same process.”

Instructions: Cream sugar, oil, and eggs until smooth. Mix in milk, baking soda, salt, and flour. In a separate bowl, mix hot water and cocoa until smooth. Then add cocoa mixture to a mixing bowl. Mix until combined. Add vanilla and vinegar. Mix, scrape bowl down, mix again until just combined. Grease and flour cake pan. This recipe will make a 9×13 pan, three 6” rounds, or two 6” and two 4” rounds. Bake at 350 degrees for 27-30 mins, or until a toothpick comes out almost clean (with just a few moist crumbs on the toothpick). 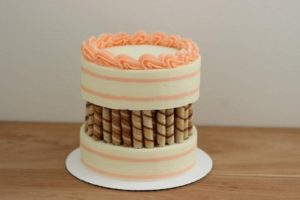 (After assembling the cake. 6″ bottom, 4″ middle with Piroulines around, and 6″ top)

Fault Line Instructions: Instead of a traditional fault line cake, I used a 6” round cake on the bottom and top, and a 4” cake in the middle, using Piroulines to make up the difference on the middle tier. I used almost exactly one tin of Piroulines. I frosted the top and bottom tier individually, using a cake comb to create the stripes, then stacked the tiers for the final product. At this point, after chilling the cake and setting the frosting, I went back with additional frosting and created the more traditional “fault line” look, finishing off the edges with edible gold paint. 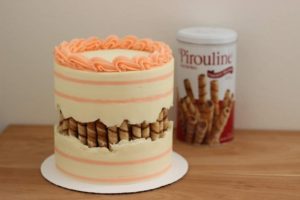 (After creating the fault line with additional frosting)