For The Love Of Strawberry

With its pink signature swirl and fluffy crème filling, Strawberry Piroulines have once again hit store shelves. The popular wafer is typically only baked from December through April, making it a seasonal treat worth waiting for. And trust us; the journey to get there wasn’t as simple as just baking cookies.

We originally had the idea to create a Strawberry wafer back in 2008, and only released it for a short period. Ten years later, we decided to bring it back, but not before making some adjustments. Operations Manager Scott Beaube works in Research & Development at our Madison, Mississippi bakery. Scott was tasked with finding a natural strawberry flavor for our crème-filled wafer. “I tasted as many different strawberry products as I could to get a sense of where I wanted to go. I ran over six different formulas until I landed on what I thought would be the perfect taste.” 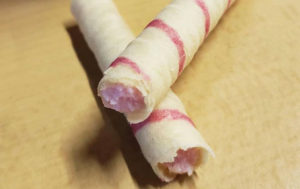 With the heart of our strawberry wafer perfected, it was time to create its character. Scott said the process to create the signature pink swirl took several different runs, and the wafer wasn’t toasting the way he wanted.  Then one night, he was washing a pan and noticed the striping mixture was blending well with water. “This was the lightbulb going off,” according to Scott.

After eight months of testing, Scott was almost certain he had discovered the ideal combination. A co-worker later solidified that thought. ”He stopped by my desk after one of my last sample runs and helped himself to a cookie, and his eyes lit up.”

Just months later, Strawberry Piroulines were reintroduced as a seasonal product in April of 2018. “At first, I was relieved that I had done it,  but that soon turned into a huge sense of accomplishment,” said Scott.

As for what’s next? New flavors and different snacks are in the works, but staying true to his trade, a good magician never reveals his secrets. Guess we’ll just have to wait and see.